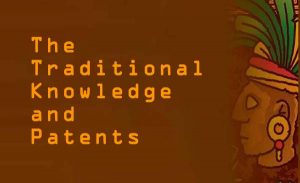 From time immemorial, from music and dance to science and technology, ideas and inventions have been transferred from one generation to the other within various communities. Today’s practice can be said to be a collective knowledge of all the inventions and innovations that occurred over a period of time and then transferred as traditional knowledge. Having being transferred with the communities over generations, these ideas and inventions have developed a cultural attachment within the community, thereby encouraging ownership of the community for the particular set of knowledge. Recent trend shows that many of these practices and ideas have now become the basis of new inventions. Contrary to the nature of traditional knowledge that promotes community interest, patent law encourages private monopoly and profit. However, in the commercial world prevailing today, such an amalgam of traditional knowledge and patent laws has gained recognition.

“When an elder dies, a library burns” – AmadouHampate Ba[1]

Traditional Knowledge (TK) can be said to be the skills, ideas, and knowledge that is passed within any community, generation after generation, causing to form a spiritual and cultural identity.[2] Further, it also includes all the innovations and advancements made on account of the needs of the society, TK can be referred to as ‘a living body of knowledge that is being transferred over the generations.’ Having ancient roots and developed from experiences over thousands of years, Traditional Knowledge is generally communicated and transferred orally and is also informal. Such knowledge, thus, has no protection under the conventional system of intellectual property protection.

An ideal example of TK would be Neem, which is considered to have a lot of use and applications, including pest repellent, cosmetics, medicines, etc. and the same has been mentioned in Indian texts from 2000 years ago.

From the view of patent laws, TK can be said to be information, written or unwritten, passed on by various communities, and which is already in existence. A documented TK attains the feature and character of the prior art and because it is available in the public domain, there cannot be any limitation and prevention of commercial use of such knowledge. Adding to this, Section 3 (p) of the Patents Act, clearly mentions that traditional knowledge shall not be considered as an invention or an innovative idea.

To avoid/ prevent patent grants to TK in India, an initiative has been taken to document and publish all the TK by an e-library, and such a library is called as Traditional Knowledge Digital Library (TKDL). TKDL provides details of scientific and traditional knowledge arranged in a manner according to the classification of international patents.

For undocumented TK which are held by various communities, patent laws come into the picture as there are many organizations trying to get ownership over such TK in order to exploit the same for commercial gains. In the case of undocumented TK, in the eyes of the law, it is relevantly easy to prove it to be a novel invention. With the intent to provide a solution to this problem, the Indian Patent Office issued a circular stating that the patents which are pending within the TK domain will be made available online and any objection with regard to the same can be made at the Patent Office.[3]

TKDL was a major and important step taken by the Indian government as an effort taken to revoke and retract the patent on turmeric for its wound healing characteristics by USPTO and patent on neem for its anti-fungal properties granted to EPO. It is worth mentioning here, that traditional knowledge in medicines and Ayurveda exists in various vernacular languages of India like Sanskrit, Urdu, Tamil, etc. and so it is difficult for the patent examiners of international patent offices to access and comprehend. In the year 2005, it was noted that approximately 2000 patents were granted concerning Indian medicines, annually, across the globe. Concerned with the above statistics, ancient texts on Indian medicines, including Ayurveda, Siddha, Unani, and Yoga, have been published, in TKDL, with 5 different foreign languages, namely, English. French, Spanish, Japanese, and German. The entire process was done with the help of various IT tools and an exclusive system of classification called Traditional Knowledge Resource Classification (TKRC) Bio-piracy and Misappropriation of TK.

Bio-piracy can be said to be the use of intellectual property protections and IP systems to make the exclusive use of those biological resources, biological products, and patents that have been in existence and in use in the non-industrialized sector over centuries, legal. Bio-piracy can also be seen as the act of misappropriating traditional knowledge with a malice intention to gain profits by getting patent protection over knowledge. There are various factors that make traditional knowledge vulnerable to bio-piracy, such as devolution, lack of appropriate laws, the tussle between the systems, and encroachment. Use of the traditional knowledge can be of great aid as it can be used to enhance and develop the best possible product or processes for people without much investment in R&D and clinical trials. Overall TK can be a great time saver.

The patent for Neem was first filed by W.R. Grace and the Department of Agriculture, the USA in the European Patent Office.[4] The patent was granted for the anti-fungal property of neem. In the particular case, a method involving contact between a fungus and neem oil formulation for the purpose of controlling fungal growth in plants was patented. An opposition was filed against the said grant by India. The opponent proved that the neem plant contains a number of compounds and is used as astringent and antiseptic in many cases. From diabetes to skin diseases, all parts of the plants have been used to cure various types of diseases. Neem twigs have been used as toothbrushes for centuries ago. Hydrophobic extracts of the neem seeds were not just known but used to cure skin diseases and fungal infections in plants. The same has been written in the Indian Ayurvedic texts.

EPO found the invention not to be novel or innovative and similar to the prior art and thus, revoked the patent which was granted.

An Indian herb of the tropical region, turmeric, is used in a variety of ways like food, medicines, etc. Turmeric has many benefits as it acts as a blood purifier, treats cold and skin diseases, and is also used as an essential food ingredient in the Indian kitchen. Patent on turmeric for its wound healing properties was granted to the University of Mississippi Medical Centre, by the United States in the year 1995.[5] The objection was raised by India on the grant of a patent on turmeric. Evidence was provided with references stating turmeric was used for healing wounds for centuries, in various languages, namely Hindi, Sanskrit and Urdu.

A mid-way between TK and Patents

While TK promotes community interests, patent supports individual monopoly. With the concurrence of both these worlds in cases of “TK-derived inventions”, there is a necessity to get a balance between the two.

In India, this balance is struck by the Biodiversity Act, 2002. Section 2 (a) of the Act read with Sec. 6 (2), brings the concept of ‘benefit sharing’ with respect to the product or process derived or made with the help of knowledge and for commercial purpose which is conserved with the ‘benefit claimers.’ Benefit claimers are referred to the ones are the holders of knowledge of the use and benefits of such biological resources and innovation in relation to the use and application.

Those who hold traditional knowledge is referred to as ‘benefit holder’. National Biodiversity Authority has been taking the initiative to protect the benefits of the benefit holders by way of agreements in relation to benefit-sharing that is made between the TK holder and the inventor who wants to exploit TK-deprived inventions in the commercial market. Such agreements act as a win-win for both the parties – the TK holder and his rights are appreciated and the patent holder gains a monopoly in the commercial market.

This mid-way was followed in the case of Jeevani drugs, where a patent was granted to the Tropical Botanical Garden Research Institute on the energy-enhancing property of fruit from the plant of Jeevani. Fruits of Jeevani was used by the Kani Tribe of Kerela at the Western Ghats to reduce fatigue. In this particular case, a revenue of 50% was shared with the TK holder by the patent holder.[6]

Traditional Knowledge, definitely, is a cultural heritage and backbone for any country but at the same time is a valuable resource with a lot of potentials that need to be exploited to bring economic growth and development in a country. It is also obvious that there is a need to maintain a balance between the profits and benefits of such knowledge in the commercial market and the protection of the rights of the native communities so that the socio-economic harmony of a nation is left undisturbed.

Having enough provisions to protect TK, it has become a gold mine in this regard that needs to be exploited and used. Limited investment and ever-growing needs of the people have resulted in showing great potentials in TK and TK-derived inventions. It is a prime time, with many provisions for protection, to get into the world of TK and harness the same for innovations and creations. However, the rights of the local people and the cultural heritage of the country should not be prejudiced for commercial benefits.